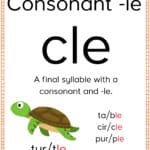 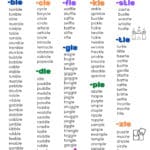 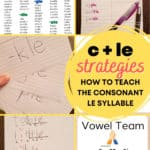 Learn all about the consonant le syllable, including how to teach it using multisensory methods that follow the science of reading.

You can find all my syllable posts here. And you can read The 6 Types of Syllables here, where I explain what a syllable is, how to count syllables, and go over the 6 syllable types.

What is the consonant -le syllable?

A consonant-le syllable is a final syllable with one consonant followed by l and silent e. It always occurs at the end of the word.

A consonant-le syllable has no vowel sound, or rather, it produces a schwa sound. The silent e at the end of the syllable is the only vowel. Only the consonant and the l are pronounced.

Why the silent e in the c+le syllable?

Simply put, every syllable has to have a vowel sound. The silent e helps to create the schwa sound. Hundreds of years ago, le words were spelled el. But now we have reversed the spelling, and the sound stayed the same.

When should you teach the consonant le syllable?

This should be taught after students know open, closed, and silent e syllables. I would also wait until students know the r-controlled syllable since some c+le words contain bossy r in the first syllable.

This is usually one of the last syllables taught, with the vowel team syllable being taught after this.

Start off by marking the vowels and consonants to help guide where to split the word. Because c le words are usually 2 (or more) syllable words, students must know about open and closed syllables. After marking the vowels and consonants, they split the word by pulling the consonant before the le away with it. Then they need to determine if the vowel in the first syllable is open or closed and mark it accordingly.

Teach students how to tell if the first syllable is open or closed. After students split the word according to the c+le rule, they look at the first syllable to determine if it is open or closed. If it ends in a vowel then it is open and that vowel says its name (makes the long sound). If ends in a consonant, then the syllable is closed and that vowel says its short sound.

One of the first activities I do when teaching any new sound or syllable pattern is to isolate that pattern in words with color coding. Provide students with a list of consonant le words and use a highlighter to trace the c+le syllable within the word. From there you can use a short decodable passage and ask them to read and trace all the c+le syllables they can find.

Some other multisensory writing ideas include air writing, tracing, and sand trays. Remember to always have students say the sound as they write/trace.

Create flashcards with just the c+le syllables, for example -ble, -dle, –ple, etc. Hold up the card and have students say “b-l-e says ble”. You want them to associate the cle ending with that schwa sound so they stop misspelling c+le words, like candol.

Write multisyllabic words with consonant le endings on flashcards then have students follow the marking and splitting procedures (mark vowels and consonants, split the word, cut along the split). You can do this with worksheets and decodable passages too, or as part of a game.

You can make any game into a phonics game by simply asking students to read/write/spell on their turn. I created this phonics board game mat that I use with my students. We roll the dice, move our pawn, then read or syllabicate a word on our turn.

Sort consonant le words by their endings or first vowel sound (open/closed). You can use word lists, flashcards, or worksheets. Word sorts are an easy no prep way to practice lots of phonics skills.

You can dictate words with the c+le to test their proficiency and provide more practice. This would be one of the last activities I do once I feel students are comfortable with the c+le syllable.

Don’t forget to make it multisensory!

Remember that for struggling readers the multisensory aspect is critical. Regardless of the activity, incorporate at least 3 senses. If students are tracing, make sure they’re also vocalizing the sound. If students are blending using cards, again they can vocalize the sounds as they blend. You want them to see it, hear it, and write/touch it every time.

If you’re looking for more tips on teaching reading to struggling learners, check out these other posts:

Want to remember this? Save How To Teach The Consonant le Syllable to your favorite Pinterest board!

If you’ve read a few of my posts then you’ll know I teach graphemes and use phonogram cards all the time! They are such a great tool in phonics lessons and are so versatile and effective. I am often asked a number of questions on this topic: “What are phonograms? How can I use phonogram… 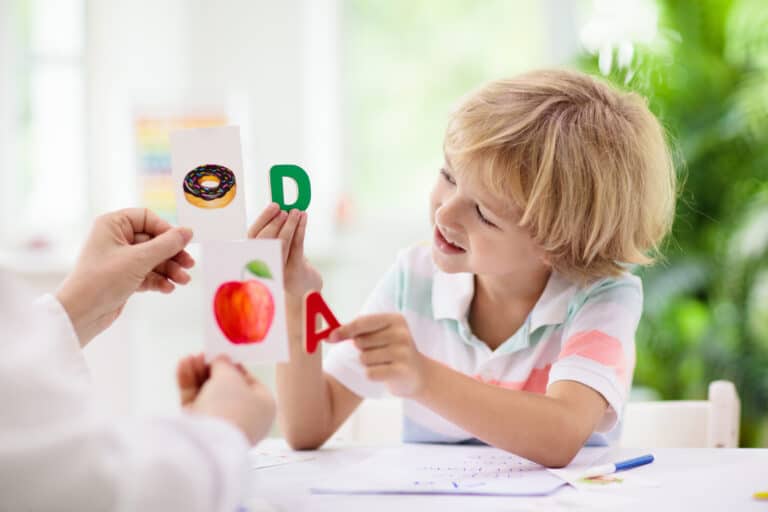 When it comes to teaching reading, phonics is definitely one of the most important aspects. But what’s the difference between phonics, phonemic awareness, and phonological awareness? And what do each of these terms mean for your students? This guide will break it all down for you! What Is Phonological Awareness? Phonological awareness is the ability… 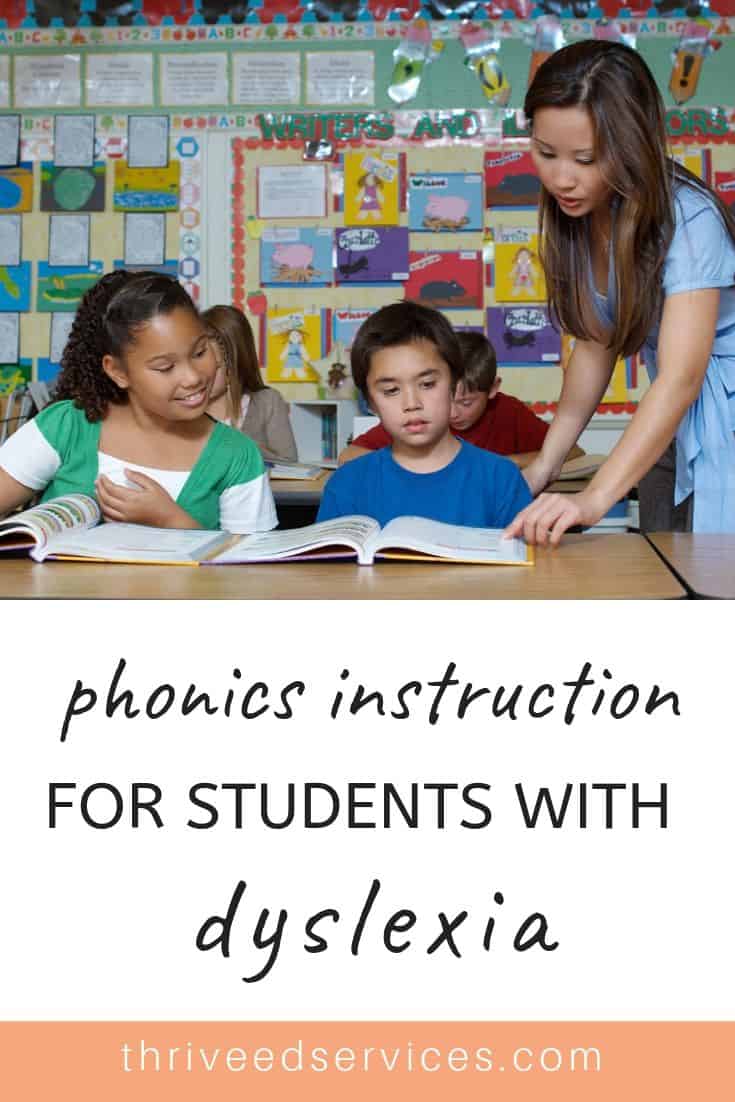 Teaching students with dyslexia to read involves very different methods than the traditional reading programs used in most classrooms. Effective phonics instruction is key to remediating reading difficulties and using a systematic synthetic phonics program is best. But first I’ll go over each type of phonics method to help you see why they are inadequate…

Do you struggle with teaching CVC words to your students? Or are you looking for new and different ways to teach the CVC pattern? In this blog post, you will learn what a CVC word is, how to teach them, plus download my FREE CVC words list to help you plan your activities. What is… 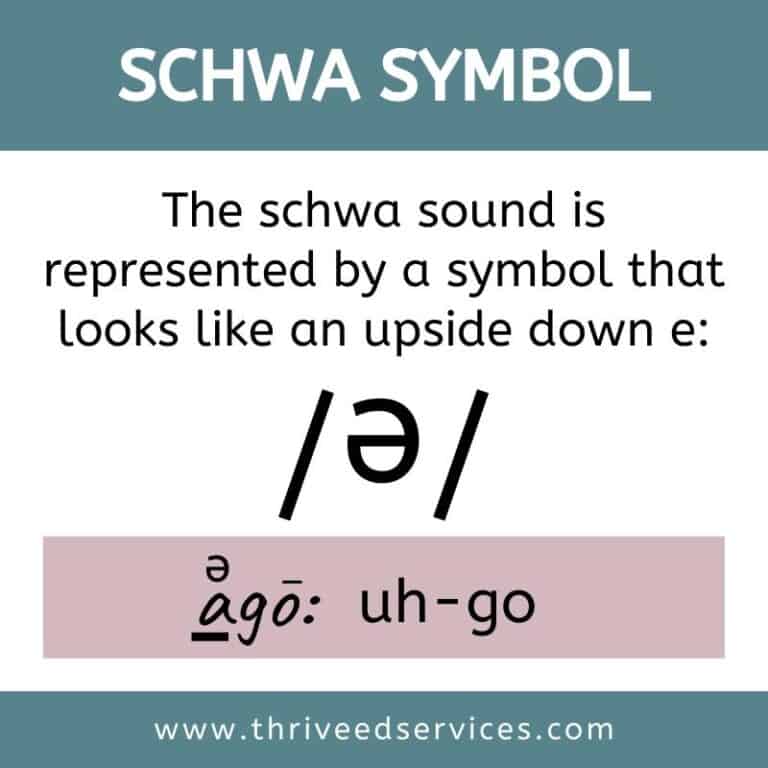 Did you know that the schwa sound is the most common vowel sound in the English language? And despite this, it is a tricky sound to teach, especially when it comes to spelling. In this post, I break down the schwa sound so you can confidently teach your students all about the schwa! What is… 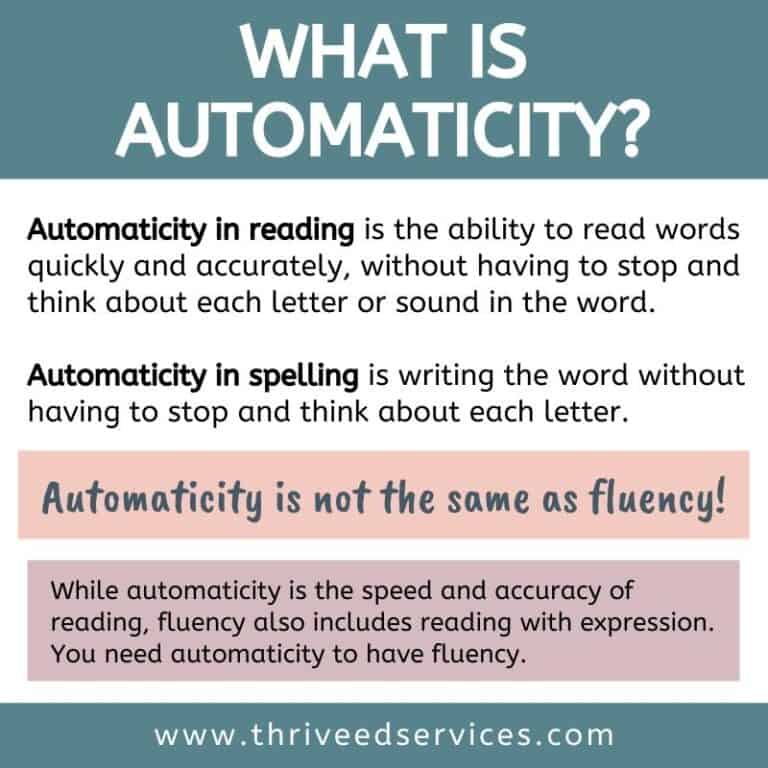